Renovating the Community Center – Month One

Ten days earlier, Eco Bay Services, Inc., began abatement work on the building.  The removal of hazardous materials was completed by July 23rd.  KCK Builders, then had freedom to work on the entire site. Perimeter fencing was placed, the CMU wall on the western side of the building removed, and areas of concrete walkway were demolished.

Inside the building, the flooring was extracted, the kitchen cleared of cabinetry and acoustical tile and an outdated heating system were removed from the ceiling. Approximately 100 cubic yards of soil was removed to allow for re-grading of the parking lot.

The next month will bring more changes. For safety, we ask that park visitors stay out of the fenced area as construction continues.

It may only be the beginning of 2020, but the end of the community center renovation is coming into focus. The contractor, KCK Builders, expects to complete work in time for the Kensington After School Enrichment Program (KASEP) to return for all or most of its spring session, which begins March 16.

The biggest factor in firming up the completion date involves the delivery and installation of the NanaWall and new clerestory windows. The NanaWall is manufactured in Germany and will not be delivered until mid-February. The clerestory windows, made in Los Angeles, also arrive this month. Scheduling inspections and obtaining final permits for occupancy also impact when we can all see the results of so many years of planning.

Since an update was published in the November Outlook issue, significant progress has been made on the exterior aspects of the renovation, especially re-grading and widening paths required for improved access for those with mobility challenges. New asphalt has been installed, and there were three concrete pours lasting several hours each in late November. Architect and project manager Farhat Daud, a Kensington resident, worked with Hilltop School principal Judy Sanders, Kensington Community Council President Anne Forrest, and Kensington Library staff to ensure that children, parents, and library patrons all knew about the pour so were safe while the cement trucks were at the site.

The Kensington Police Protection and Community Services District will submit documents to Contra Costa County to request reimbursement for the $158,000 that remains under the terms of its WW grant for the ADA improvements.

While hindsight is always 20/20, we’re hoping that the forecast for the community center is also 20/20! 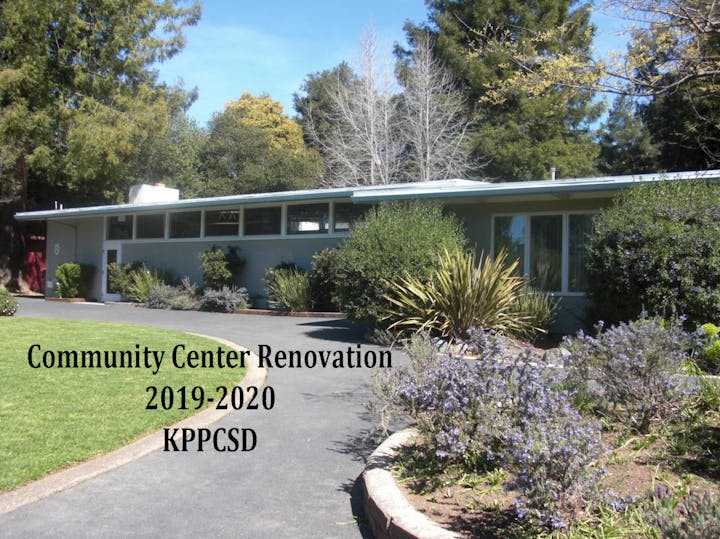